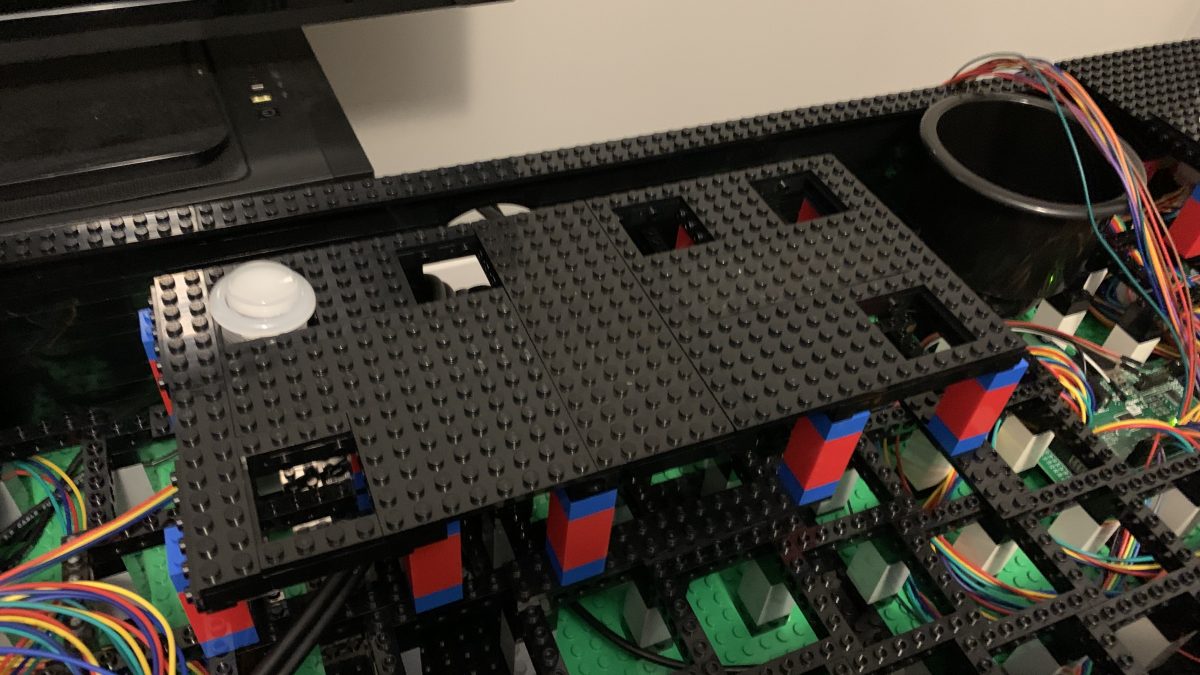 In a rush to complete the top, I hurry to order more pieces. However, this time, I plan to finally give it some wicked 80’s flare, azure-colored tiles! After giving the design a lot of thought, and doing a bit research, I concluded that the early 80’s was basically the golden age of arcade gaming. So instead of making a design that represents only one game, I wanted to pay homage to the entire industry with the design. I thought about the 80’s, I thought about LEGO®, and ended up on the idea of a Tron-like design.

I present to you, neon-colored line art!

The pieces I chose are a bright neon because I feel like that will encapsulate the look that I’m wanting this machine to end up with in the end. I also start buying a bunch of 2×2 black tiles like crazy to cover the rest of the panel. Once the pieces arrive, I begin my work. After a short period of work, I have some of the design started and the panel starts getting its final look.

As I continue to make progress mounting the start buttons, I toy around with more design. I order new colored neon tiles and add those into the design in the form of directional arrows around player 1 and 2 joysticks. I wanted to add these arrows around players 3 and 4 joysticks, however, there were two issues with that plan.

Next, I tackle mounting the admin buttons module. I begin with installing 1 button into the module and then trying to see exactly how I’d secure this thing down.

Once that was figured out, I installed the rest of the buttons and then mounted the entire module into the panel as one unit. I also began adding the last of the cup holders into the unit.

Next to tile up more of the top control panel and finish building in the cup holders.

Back to the 80’s design, I wanted more for the design. However, the next bit of a challenge I ran into was that LEGO® has extremely limited color options for their tiles.

Here are some photos of all of the colors made by LEGO® today for their tiles.

Okay, so the color options aren’t terrible maybe, but the available shapes make this even more complicated. Some of those nice neon-like greens or oranges don’t have triangle pieces or other angled pieces. This combination of a lack of features, really makes designing a nice pattern much more difficult.

As a result, I have decided to move on and come back to the design at a later date.

Now that I had all of the buttons installed, let’s light it up!

Time to start covering up the middle. This actually proved much more challenging, but I failed to do some photos during this struggle. So, I’ll just have to discuss it a bit. The major issue I immediately ran into here was, how do I support the top layer above the circuit boards?

This proved a bit challenging, but with some internal design tweaks and restructuring I was able to build basically internal bridges around the circuit boards and then support the roofing that way.

Ordered some more tile, and tiled up everything but the last bit.

There’s still a bit to do honestly here. It’s not really complete yet.

I’ll be honest folks, this small project drained me financially.

Then I spent an additional $2,505.76 for the computer to run the software.

This comes to just under $5,000. Both of which, still needs more parts. More colored tiles for design on the panel and still needing a decent graphics card for the computer. Queue the Minnesotan “oofta”!

So, for the next few months, I’ll be taking a break on making further progress and instead focus my efforts on reorganization of my game room this sits in and the pieces lying about that need somewhere to go now. Hint: I invested in an organization system.

Therefore, I’m not sure what I’d do for my next blog entry, but I might come up with some stuff to discuss as I work through setting up the emulators and games over the next few months.

Stay tuned though and subscribe, you never know when I might decide to start working on the cabinet base next! Thanks for following!

5,783 pieces were used in the construction of this control panel.

It weighs 20.42 pounds or 9.26 kilograms (this DOES NOT include circuitry and arcade hardware, just the LEGO® brick).

Not a single brick was modified or altered in the making of this panel.

No glue was used.

The control panel can be easily moved, and transported, by one person (though awkward).

This took me approximately 186 days to build upon receiving the first bricks in the mail. However, I first started working on this project back in July 2021.

This started with me wanting to incorporate a working NES emulator using a Raspberry Pi into the LEGO® Nintendo Entertainment System™ set released at the end of 2020.

This was my first ever MOC (an acronym that fans use which stands for “My Own Creation”). I had no prior experience making my own thing from scratch out of LEGO® brick.

This is still very much a work in progress, and it’s been a fun journey. I hope to start on the cabinet next year. I also very much plan on bringing this around to some shows and even some museums in the future. So maybe you’ll have a chance to play on it someday yourself!

Previous Post
The Finish Line is Ahead, the Last Brick