The Finish Line is Ahead, the Last Brick 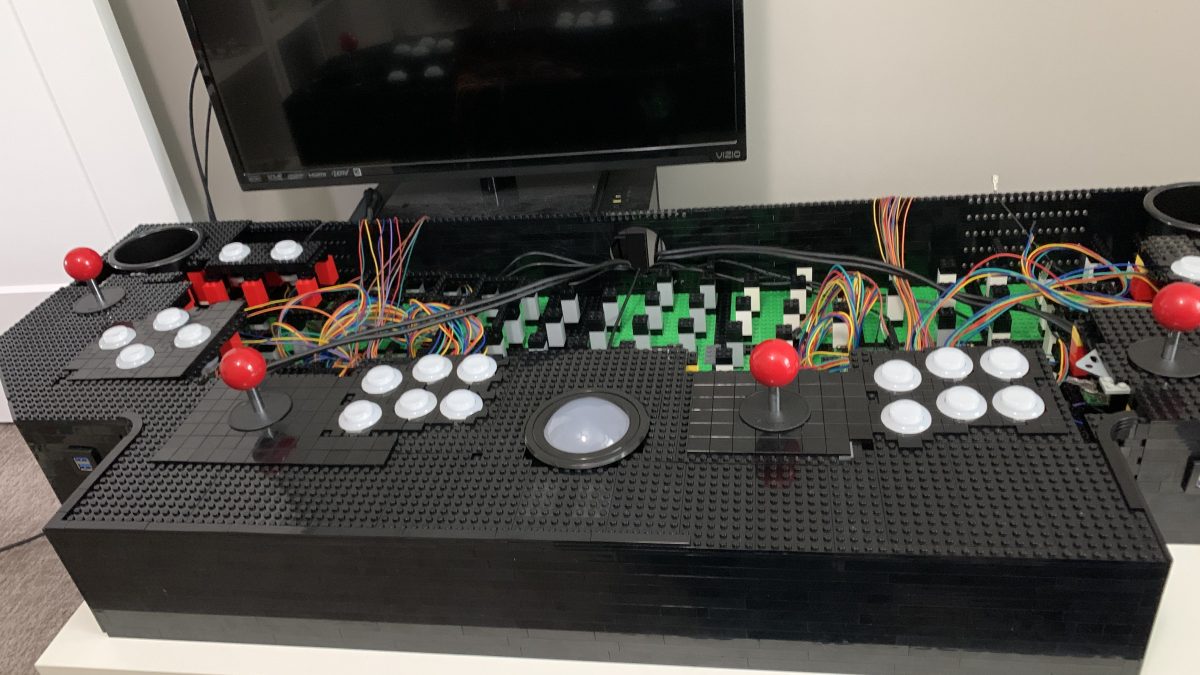 After a bit of work, and a lot of wiring, player 3 is finally installed. I’m starting to pick up speed now as most of the challenges are behind me. The finish line is ahead and now it’s time to work upwards, towards the back of the control panel. However, a large part of this will require the rest of the internal structure built out. So, I’ll continue the expansion of the lattice grid throughout the inside of the control panel.

In the midst of building out this internal structure, I alter the upper corners in order to hold the cup holders. I also begin to plan out the installation of the start buttons.

Once finished with the internal structure, I plate up the top and slide in the cup holder. One of four installed!

With this now installed, I decide to begin closing up the left side of the control panel. However, before doing so, I need to install the left-side USB ports.

For reference, these are the USB ports that I purchased: https://smile.amazon.com/gp/product/B07J4X41CS/

This required a little bit of design modification on the front. Additionally, so the USB ports didn’t pull out when cables are yanked out, I ended up clipping off some prongs on inside of the USB ports so that they’d better grab onto the back of the bricks. Now these photos were taken from an earlier time when I realized that I’d have this issue, but they demonstrate what’s required.

Once I clipped these prongs, the USB ports snapped right onto the back of the LEGO® brick perfectly.

Finish Line is Ahead, Start and Admin Buttons Added

Next, I plated up the rest of the top of the left side.

Since I’m building the modules for the start buttons, I figure I should build the admin button module. This module is significantly more complicated as it requires 6 buttons total. However, after a bit of trial and error, I finally come up with this build.

I can’t quite install this module yet into the control panel as I want it to be dead center. So, I lay it inside and I move onto the next task, let’s install player 4 controls!

Before I begin installing player 4 controls, I decide to attempt something risky. If you look back at the photos in my blog entry The Final Expansion – Players 3 and 4, New Challengers, you’ll see that I have a chair propping up the right side of the control panel.

This is because the length of the control panel was not stable, and it couldn’t support the wait of the ends. The ends would bow and snap in two if left unsupported. However, since then, I’ve spent some time building out the internal structure of the control panel.

The control panel is starting to become more and more structurally sound. Just had to take the time to mention that here as I was pretty proud of that moment.

Buttons installed next; these were shockingly easy as I just used previous tactics.

The Last Stretch – Finish Line is Ahead, Plating Up the Front

Now that all four player controls are installed, I finish up the plating of the front.

After the trackball is covered, I work on closing up the front portion in front of player 2 controls.

Before I move to plating up player 4, I think it’s time – who else here is sick and tired of looking at black?