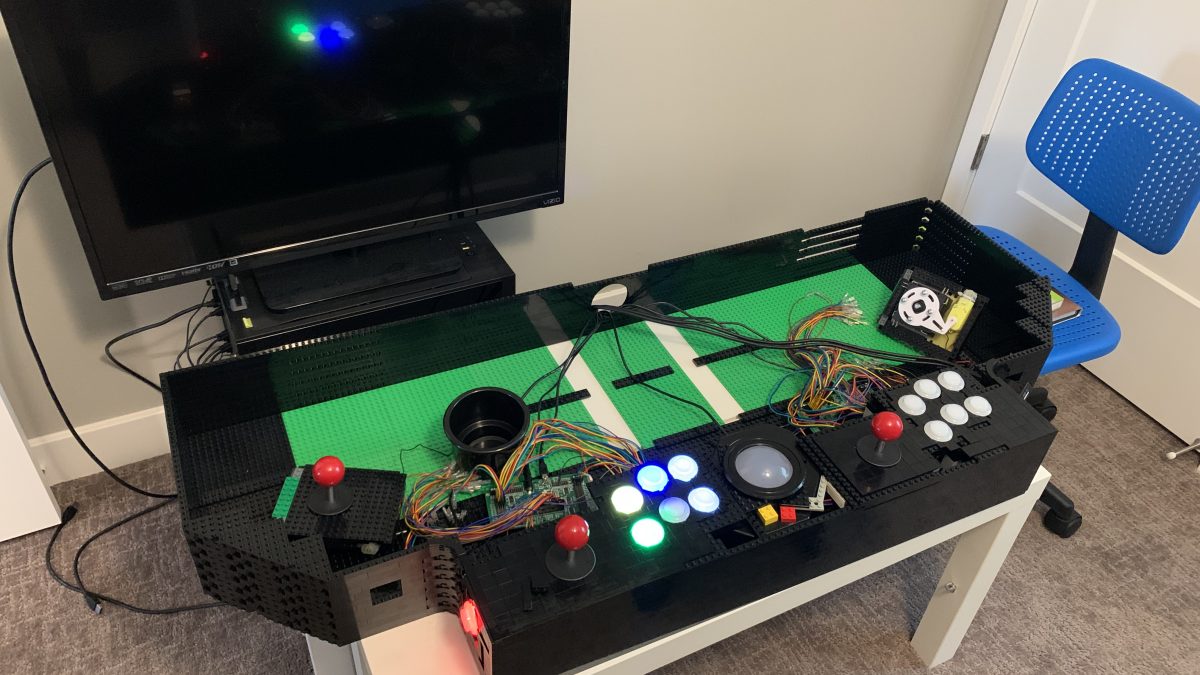 Players 1 and 2 are wired up, now it’s time for the final expansion. New challengers, players 3 and 4 join the party. Controls, button mapping, and more wires!

As you can see, there are some pieces still missing, but I have those coming in soon. It’s now just a big empty shell, time to start filling it with stuff!

But first, I need to add some aesthetics to the sides.

Which Way is Up?

Okay, so a question to everyone reading:

After asking friends and researching the issue online, I choose to move forward with facing up in the same direction as the player standing, at an angle. The issue now is how do I mount this hardware at a 45-degree angle?

I quickly found out that working in angles with LEGO® brick is a real challenge. I looked into various angle pieces available that might help me accomplish this task, such as this little part 15706 – plate special 4 stud 45° angle plate.

But the problem I soon discovered, only after purchasing a bunch of these parts, was you can’t build this back into a straight 90-degree angle.

I tried a few other ideas after this, like building with round 1 x 1 plates and trying to stack plates on top of those, but the conclusion remained the same, I couldn’t make a anything that was a2 x b2 = c2 with LEGO® brick.

So, I reached out some local LEGO® fanatics and asked for their advice and this went very well! They introduced me to a few new techniques that I hadn’t thought of before. Such as using part 2429 – hinge plate 1 x 4 swivel base and part 2430 – hinge plate 1 x 4 swivel top. Then, the crazy part, laying them on tile below on one corner, as shown on the whiteboard sketch below on the left.

I took this information back and ended up still failing to produce anything that worked solidly enough to my liking. Then I decided to just build a solid cage around the whole control stick chassis. I ended landing on this fancy part, part 14413 – wedge 4 x 4 facet.

Buttons Also at an Angle

Then of course the buttons must be angled as well. So, after a little bit of work and modification to how I integrated the buttons for players 1 and 2, I come up with this layout.

First, there are only four buttons because there are really no games for arcade stand ups that use more than three buttons. However, the fourth button is for aesthetics only, and console systems can ultimately just use Bluetooth controllers.

Player 4 is next and will follow the same install procedure. Then after this I will begin work on integrating the cupholders and adding player start buttons. More to come!

Previous Post
Building it Out – a Wiring Nightmare
Next Post
The Finish Line is Ahead, the Last Brick