The Challenge of Mounting Buttons with LEGO 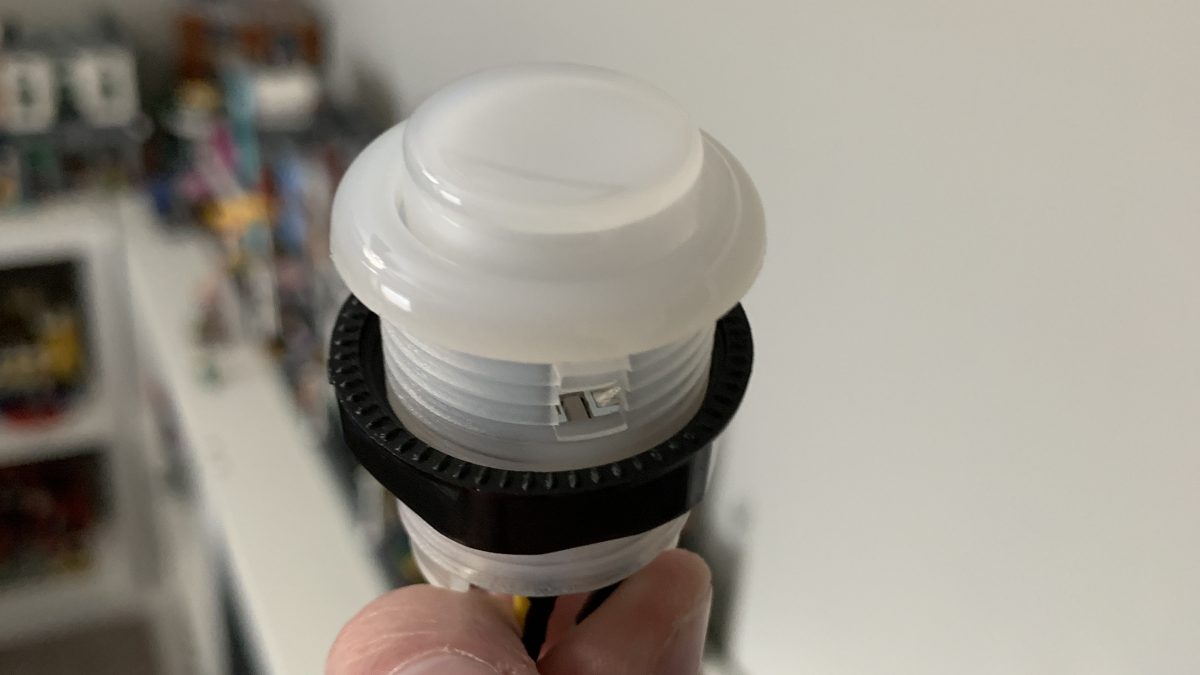 The challenge of mounting buttons with LEGO®.

I get 8mm increments to work with, so mounting buttons within those parameters is tough.

Realization of Dimension Differences and the Challenge of Mounting Buttons Associated

After mounting the joystick, I began work on the wrapping the buttons with LEGO brick. The problem I quickly ran into was that the button was 3.5 x 3.5 studs wide which made the buttons fall right through.

Not only must the buttons be held up in place, especially from button mashers, but they also can’t wiggle around. So, it’s time to do some trial and error, and what better place to do that at then a place with a lot of brick! Off to the LEGO® club! The same place I went to when I was first attempting the prototype in https://theholmesplace.com/hope-it-really-works-lego-and-controls/.

Progress on the Case

While waiting for the next get together at the club, I continued to work on the rest of the control panel. More pieces arrived and I started to build out the corners and fill in a lot of the missing pieces.

Trying Different Approaches to Solve the Challenge of Mounting Buttons

Once I arrived, I began experimenting with some different approaches to mounting these buttons more securely. First, I attempted to use L-brackets so that the button had something to easily attach to with its washer. The problem with the buttons was that they had washer that screwed in from the bottom to secure the button. At first, this seemed great, because that meant the buttons would be easy to attach. However, these washers interfered with the bricks laying around them.

You can kind of visualize this issue in the photo below. You can see the black washer just below the rim of the button and those L-brackets give that washer space to screw onto them. However, this will make tiling more difficult, which I’ll be doing to help aesthetics.

Then I tried using technic. This was a failure for many reasons.

The next approach came as a result of someone else providing a solution to use nothing but plates. This provides a better shaped hole for the button to attach. As you can see in the photo below, the hole is much more defined.

This solution excited me, but as I started to consider implementation, I quickly became aware of its issues as well. First, this design requires the bricks to be installed horizontally, this leave no place to mount tiles to later to make for a cleaner look. Second, there will be a lot of gaps between plates when mounted beside other buttons. Lastly, sticking 6 of these holes very close together will prove challenging simply due to the architecture of this design. However, this led me down another path, and that was to mount the buttons onto the LEGO® brick sideways.

All Paths Lead to Happy Accidents

I went back to my design software and began replicating the plate solution. You can see this solution in the photo below to the far left. However, as you can see, from left to right, I began working on iterations meant to solve one problem the prior iteration had. Mostly these issues were that the buttons needed to be close together and couldn’t take up a lot of real-estate on top of the panel, because of the trackball.

I finally started to settle in on a design that worked the best and kept refining this iteration further. Building the bricks vertically, but then still able to attach horizontally, just might work out.

Next, I order the pieces required to begin building the units.

Once the first unit is built, I install it into the control panel to see how it will work.

Liking it, I I begin adding tiles to see how well the buttons fasten down to the brick.

Adding more tiles around the joystick now. During the build, someone tells me that I’m building a nightmare mention for someone with Trypophobia 😅!

For now, I’m feeling good about this and will wire up the buttons and player 2’s joystick next. However, I have some other tasks that I need to complete as well. First, the trackball needs to get mounted. After that, the control panel needs to get built out more to support player 3 and player 4. Then, I need to install the circuit boards and hook up the controls to the computer. Finally, run USB cables to the front of the control panel for support of other accessories and gamepads.

Before ending this article, a quick shout-out to the Twin City Model Railroad Museum (https://www.tcmrm.org) for helping me figure out how to mount these buttons.