Building it Out – a Wiring Nightmare 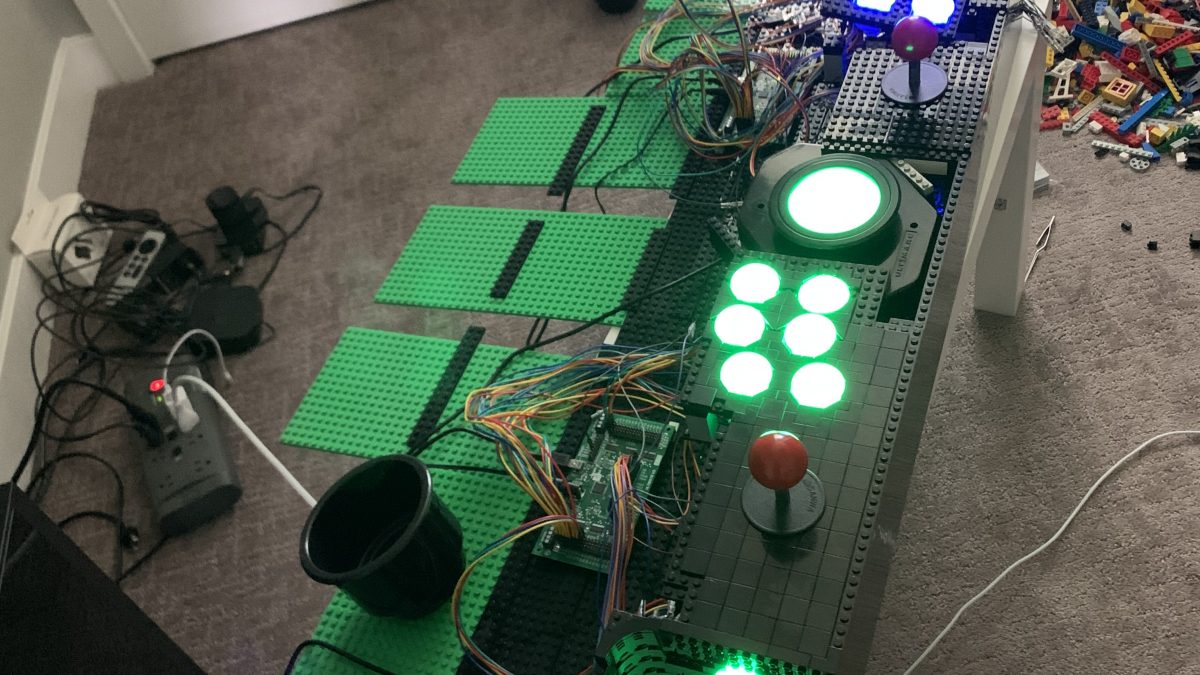 Figuring out how to mount the buttons was a huge step forward. Now I can start wiring up players 1 and 2, which will be a wiring nightmare. But first, expansion.

I finally decided to attach the bottom plates and start building back in an attempt to complete the shell. I chose green plates here because these 16×16 plates are pretty expensive to purchase, and green tends to be the cheapest color. When I say cheapest color, I still had to pay $1.50 a piece for these plates!

You can see that I purchased these plates pretty early on when I first began building the control panel: https://theholmesplace.com/beginning-the-build-of-the-control-panel/.

What I quickly realize here is that I’m running out of room for this thing on my table. Plus I want to prepare to hook it up to the computer and begin using it to help me program which buttons light up which color with each game.

First, I tried a little coffee table that I had lying around. I figured I could scooch my chair up right underneath it and work on the computer using my control panel.

Problem I ran into here was that I had no external or internal structure built yet to support the ends from hanging off of the table. So, I decided to use some benches that I had instead to help better support the full width. I’ll show this setup here in a second, because now that I was expanding, I needed more hardware!

Joysticks, Buttons, and Trackballs, Oh My!

I counted up all of the buttons that I needed and made the purchase. Waited a few days, and the package arrived.

So, I ordered two I-PAC control boards, because about a couple of weeks prior, I discovered that the first control board that I purchased, I somehow zapped. When I went to plug it in, the computer just couldn’t figure out what it was. I tried troubleshooting it for a bit, but ultimately I gave up and just ordered two boards this time around. That was a $100 mistake, those boards aren’t cheap!

Don’t forget the cupholders! Picked up these little bad boys for a little more than $2/ea. Also, I’m thinking I need a bottle opener attached to this somewhere. What do you think?

A Wiring Nightmare, Shall We Start

Now that I have the control boards and all of the buttons in, it’s time to start hooking this stuff up and first, I’m going to mount the boards to the control panel. This part is incredibly scary, because do you recall what I had to do to mount that ServoStik control board in my post Installation of the First Joystick? Well screwing up that board would have only set me back $30, but these control boards will cost me $100 if I happen to screw the board up with a power drill. Nonetheless, I need the mounting holes larger in the control boards in order to stick LEGO® through them and into other LEGO® brick on the other side.

After a beer or two and taking the power drill to this $100 circuit board (shh, don’t tell the manufacturer), tada, board mounted with LEGO® brick!

Here are a couple more photos for those who’d like a closer look at the pieces I used.

Now to Run the Wires, Welcome to the Wiring Nightmare

Not a whole lot to show here I’m sorry to admit except that wiring all of these buttons between the LEGO® brick was an absolute torturous time. This required a lot of patience, and a lot of LEGO® cuts along my fingers and hands. But in the end, success!

Previous Post
The Challenge of Mounting Buttons with LEGO
Next Post
The Final Expansion – Players 3 and 4, New Challengers